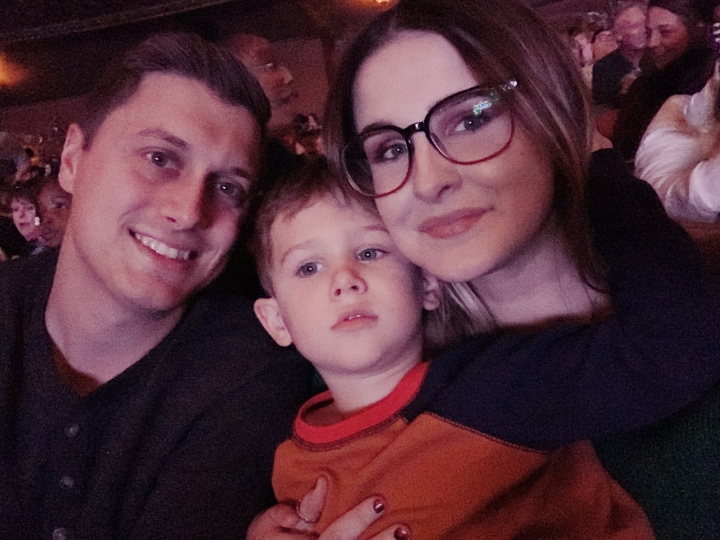 So… I’m gonna go off topic from my usual blog posts, which is obviously books. I am going to vent about something that has affected me since my son was born: Overstimulation of Touch.

There’s nothing that will make your mom guilt flare up like the sudden onset of resentment towards being touched 24/7. My son loves me with every fiber of his being. I am his person. He is a momma’s boy to the 1000th degree. But I broke down crying today. In general, I am not a touchy feely person. I am the notorious one arm hugger. I am the awkward patter. I am not a PDA person. I love people fiercely but if I’m being overly affectionate, I’m probably a couple drinks past buzzed. I like personal space. Despite all of this, I am very, very, very affectionate towards my son. He gets love and kisses and the whole wrapped arm hugs constantly. I wake up every night for him when he needs me. But every once and a while I break down from overstimulation. Here’s an example of (half) my day: I slept with him on top of me all night because he had an earache. I laid with him and watched a movie and my nephew to try to get them to calm down, which resulted in them rolling all over me and tugging on my hair the whole time. When his cousin goes down for a nap, he wants a piggy back ride throughout the house while I’m cleaning, or he hangs onto my leg while I drag him around. I tried to lay my son down for a nap since he only slept five hours last night, he has a fist full of my hair and kisses me all over my arms and legs and face for a good ten minutes. Cute, right? After a week of him being sick, very little sleep on my part, a lot of touching, a cramped body from sleeping with knees in my back and elbows in my side every night, and a boy who ONLY wants his mom 24/7… I just broke down crying. Sometimes I don’t feel like I have enough left of me for anyone else because I give so much to him. My reading and blogging are two of the things that keeps me sane. I work a few days a week to get out of the house, but I am primarily a stay at home mother. My days don’t belong to me, and that’s usually fine. That’s what happens when you’re a parent and especially a mother. But some days are hard. Sometimes you fantasize about ONE day without being touched. Lets be real, I would end up breaking that myself by swooping my son up in a gigantic hug and smooshing his face with kisses, but it’s okay to fantasize.

This is all such a cliche. And I feel so guilty for it every time this happens. My son is sick and every nerve is on edge because I’m overstimulated. One day my son is going to be older and won’t want anything to do with me. The touching, the hugging, the constant kisses, the rolling on top of me, the jumping, the crunching of my body under his weight, the hair pulling. I know I’ll miss it. But today it is hard. It has been hard before. It will be hard again. I feel weak minded and weak spirited. I love you, Sawyer. And I’m sorry that sometimes the cracks show through. But the best thing about writing it, is that it’s therapeutic. I feel strength in admitting my weaknesses. Sometimes it takes more of a toll pretending to be strong always than just letting the breakdown happen. The old saying, “there’s beauty in the breakdown,” is so apt because you’re able to rebuild mentally after the breakdown.

If you got this far, thanks for reading and letting me use my blog for multiple purposes.

2 thoughts on “A Break From The Norm: Overstimulation as a Mother”

This is a text widget, which allows you to add text or HTML to your sidebar. You can use them to display text, links, images, HTML, or a combination of these. Edit them in the Widget section of the Customizer.